Olindi: The kid who has grown from ball boy to Kenya Sevens star 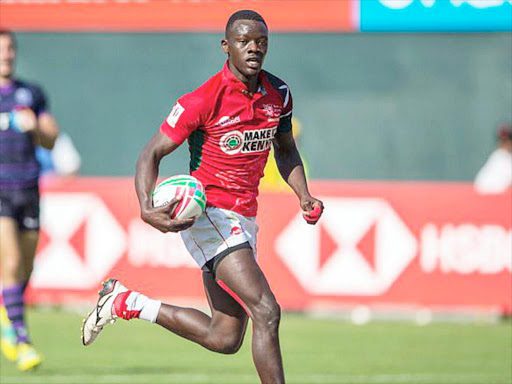 To many rugby fans, Johnstone Olindi’s rise from a ball boy to stardom might seem like a movie trailer, only that in this case his tale is real.

At 20, Olindi appears to have already beaten the odds to become one of Kenya’s hottest young prospects after helping the Kenya Sevens rugby team avoid relegation in the 2018/19 World Sevens Series.

The KCB fly half/playmaker made an impressive debut at the World Sevens Series last season making 64 tackles and scoring 122 points as Shujaa, then under Paul Murunga, survived relegation by a whisker.

He grabbed his first hat-trick of the series in Kenya’s 33-26 win over Wales to finish 13th at the Cape Town 7s.

Olindi was born and bred in Huruma slums in Nairobi. Coming from a humble background, life was not easy for his family after his dad passed on in 2004.

His father’s death left Olindi’s mother -a cleaner at a hospital- with the saddling burden of parenting.

But ten years after being introduced to rugby by a friend, the second year Library and Information Science student at Catholic University, who started playing rugby on the fringes at KCB Sports Club – a walking distance from Huruma, is now living his dream of a professional rugby player.

Olindi grew up as footballer, following in the strides of his parents only for him to switch to rugby at the age of 12 due to peer pressure.

While studying at Laiser Hill Academy, Harambee Stars midfielder Musa Masika tried to convince him to go back to football in vain. His love for rugby had just become irresistible.

Olindi’s rise to Shujaa stardom over the last one and half years has been nothing short of phenomenal as he revels playing alongside his role model Collins Injera.

He has gone on to establish himself in the team since making his debut in Dubai Sevens last campaign.

“Words can’t describe my rugby journey. But all this success is by the grace of God. From my days as a ball boy at KCB, I always wanted to be a great player and at least represent my country in international tournaments. I played with so much hunger in every game so that I can uplift my family,” Olindi told Standard Sports.

“I was used to the game at an early age and that made me understand it better. To be honest, rugby has changed my life. I vividly remember my first flight ever in my life was when we went for the Dubai Sevens in 2018.”

He continued: “Looking at players like Collins Injera, Fabian Olando and Andrew Amonde play either on the pitch or television inspired me a lot. I even had a book in primary school with a collection of newspaper cuttings including the Kenya Sevens team that won the Singapore tournament. I drew motivation from such photos and I told myself that one day I must reach that stage.

“I’ve always looked up to Injera as a role model since my childhood. But it is now a dream come true to play alongside him in the national team together with other star players like Andrew Amonde.”

Olindi, who earned a national team call up in 2018 after inspiring Homeboyz to a double-local sevens circuit and Enterprise Cup, before rejoining KCB in July 2019, admitted that he was at first afraid of making mistakes but the senior players’ kind actions made him feel at home.

“I had a bad thought about the senior players when some rejoined the team at the close of last season and I was afraid to make mistakes, but after playing with them it was the opposite. They’ve been encouraging us throughout. There is even a time Amonde told me he has served the national team more than my age. I took that as a challenge,” he said.

“I personally feel challenged with what they have achieved with the team, but I think there is nothing impossible. Yes, I’m still learning a lot from them, but my ambition is to become a top player and leave a legacy in the game. As far as I’m concerned, there is nothing like good luck in rugby. I just believe in training hard and playing smart.”

He recalled how his decision to use money meant for Christmas clothes to buy boots twice put him in trouble with his mother.

“Mum was first against my decision to switch from football to rugby, but she later ceded and become supportive.

“But there are two Christmas holidays when I seriously fell-out with her. On both occasions, she gave me money to buy clothes but instead I used it to buy boots and a short. For me that was more important than the clothes. But she later cooled down and we moved on,” he said.

But Olindi feels indebted to Northern Suburbs Cubs coach Simon Jawichre and Homeboyz coach Paul Murunga for introducing him to the game and developing his talent.

“I will always be grateful to two coaches (Jawichre and Pau) for making me whom I’m today. They always believed in me and had confidence in me. Jawichre introduced me to the game and made me love it.

“Pau then developed me into a fine player and introduced me to the world,” said Olindi.

As Olindi’s idol, Shujaa speedster Collins Injera is happy with his progress but warned against putting too much pressure on him.

“I saw Olindi for a while as a ball boy and interacted with him on most occasions.

“But I think just for him to rise from a humble ball boy to play for the national team tells you how talented the lad is.

“He’s actually one of the players who stood up when the team was struggling and showed what they can do on the international stage,” said Injera.

“I think for him the progress has been good, but he still has a lot to learn and cover. He’s like an x-factor but he is still developing.”

Though the second top all-time try-scorers on the World Sevens Series hailed Olindi’s quality, he doesn’t consider him a threat to his national team career.

“It is a good thing that we play in the same position and being his role model that’s a great motivation to him because he can pick up some skills from me,” said Injera.

“I train with him and if he asks me questions, I’m always ready to help him. I think he’s has so much ammunition to play in that position because he’s a kicker, playmaker and he can think well off his feet.

“It is a good thing to have competition in the team, but that doesn’t mean he’s a threat to me.

But I’m a person who has played over the years and I might be on my way out and having a player like Olindi stepping in is a good thing for the development of the team.”

The youngster started out at KCB’s Northern Suburbs youth ranks in 2010 where played alongside Vincent Onyala as he served as a ball boy.

He later joined Upper Hill High School in Form Two on a partial scholarship from a private school before Laiser Hill offered him a full scholarship in 2017. He repaid Laiser’s faith by helping them win the East Africa Secondary Schools rugby 15s title the same year.

Immediately after completing his Kenya Certificate of Secondary Education (KCSE) examination, Olindi was signed by Homeboyz before moving back to KCB last year.

But having noticed Olindi’s talent at a younger age, Northern Suburbs Cubs coach Simon Jawichre, is not surprised by his breakthrough.

“He just started off with the other group of kids from the ghetto (Huruma and Mathare) around KCB Sports Club. Yes, he was small in stature, but from the first time I trained him, I always knew the talent was there. That’s why I’m not surprised by his breakthrough,” said Jawichre.

“Actually, the essential idea of forming Northern Suburbs Cubs was to make these kids’ mindset to think beyond their struggles and comeback to save their parents from poverty. I’m really proud for both Olindi and Onyala.”

And Murunga who handed him debuts both at Homeboyz and Shujaa is equally impressed with his progress terming him as an intelligent and courageous player.

“Olindi is someone who’s grown watching and knowing the game as a water boy at KCB. He’s a type of player who is always ready to take risks.

“Even those days when everyone was rookie in the national team, he stood out as a determined player. It is that courage that has made him reach where he’s right now,” said Murunga.

“These youngsters were in tough scenario because they had to play most of the matches without a proper preseason and experience. But his combination with Onyala (Vincent) and Taabu (Daniel) made it easier for them to adapt quickly on a bigger stage.

“But I’m proud of Olindi’s character because without players with such fighting spirit, maybe we could have been relegated.

He added: “The confidence that he had even when senior players thought we needed some backup in France to avoid relegation lifted the team.

“As much as he has not featured in most of the matches this season, I still believe he is one of the best players in the country at the moment. They should give him more time to make mistakes as he grows into a better player.”

Though KCB 15s coach Curtis Olago has predicted a bright future for Olindi, he has warned him not get carried away with the praises.

“We brought him back from Homeboyz because we were looking at the future. He’s one of the key players at a particular position (number 10 role) for the future.

“But I think we still have a lot of work to do with him in terms of understanding the 15s game because he has been concentrating too much on the sevens game. This is still work in progress, but he will have to improve,” said Olago.