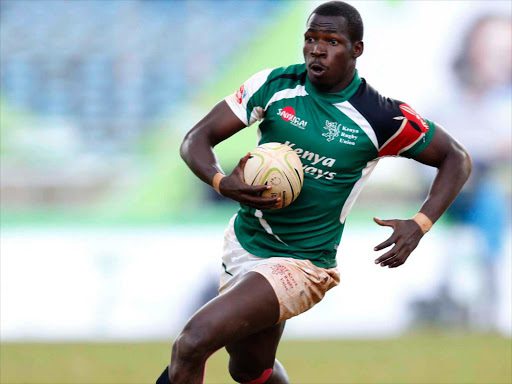 When you walk into the Kenya Harlequin club house every afternoon during training days, you are guaranteed to find Patrice Agunda in the gym doing his extras. If he isn’t there, rest assured he is on his way as has been his habit over the years. In the thirteen years he has been a Kenya Harlequin player, his rugby growth has been impeccable and it birthed the idea to start a business of his own, something he’s always wanted to do; be his own boss.

Patrice, who has played for Kenya at all representative levels (U20, Sevens and Fifteens) started his rugby journey in form two at St. Mary’s Yala. He remembers his first interschool match where he gave all his defenders hand offs primarily because he didn’t know how to pass the ball.

“When some of the seniors led by Oliver Mang’eni saw me play, I received a request to join the school team and that’s how I took this sport seriously.” His rugby profile started taking shape while in form three when he was included in the Nyanza team taking part in the 2006 Safari Sevens Schools competition.

Once Patrice completed his high school studies in 2007, he joined Nondescript RFC before moving to Kenya Harlequin. In typical Ngong Road banter, he added that something about Impala just didn’t seem fit for him.

On his first day at the Quins’ ground, he found the likes of Victor Sudi, Chris Oduor playing touch and was excited since these were some of the players whom he had idolized while in school. Chris Oduor asked him to join the team training and later that evening he learnt that there was a gym available in the same premises. From that moment onward, he has never looked back.

When it came to his education, Patrice had a well thought out plan where he dedicated himself to his rugby club for two years after which he approached them and asked for financial support for his academics.

His father was a lecturer at University of Nairobi and that meant that he had a certain percentage of the school fees covered and all Quins’ needed to do was cover the rest. Seeing how good he was, the club went ahead and agreed to pay his fees and he studied Psychology.

“Patience is the one thing I can confidently say rugby has taught me,” said Agunda.

He has learnt that one needs to be very patient with their teammates because it’s for the greater good of the team when everyone fully understands their role both on and off the pitch. He also added that being selfless is another thing rugby has taught him.

“As a rugby player, you learn to look at the bigger picture. You may find yourself given the smallest role in the team but that shouldn’t dampen your spirit because at the end of the day, you’re playing a role that’s helping the whole team. These values are also relevant in our day to day activities.”

INSPIRATION TO VENTURE INTO BUSINESS

Agunda, was a regular on the national sevens team, Shujaa, for close to five years between 2011 and 2015, playing regular on the HSBC Sevens World Series. It was during one of the series tours where he noticed the variety of boots available, something that was scarce back home. That was the beginning of his business ventures, Bijon Brands Africa and Fanatics Boots.

At first, he only shared pictures on social media for people to look at and not really make a sale but later, he slowly started selling to the few who’d ask for the shoes.

His time with Shujaa ended in 2015 and when his sister asked him to look for an internship, it was a gentle nudge to start focusing on his business formal employment has never been an idea he entertained.

“I’ve always wanted to live on my own terms and this is why I chose to start a business,” he added.

Going back to his online shop, he was determined to share photos of what he intended to sell regardless of whether people bought the products or not.

“I was determined to do my part, which was posting all the photos of items I had. I didn’t care if people would buy them or not, I just wanted to put everything out in the public. The more I shared photos, the more clients I started getting and along the journey, I learnt of the many other things I could do based on the questions I got from my clients.”

Patrice started off selling sports shoes and attires and his business has grown to merchandising and business development. The growth came through his keen ear where clients would ask if he was able to brand items for them and he always knew just the right person to help him out. The relationships he has made with people have been very impactful on his journey.

“I love listening to clients because it presents an opportunity for me to learn new things,“ he added.

“I also learnt that the way I carried myself on and off the rugby pitch played an integral role in getting clients for my business. Rugby builds character and this is something some of us forget, character isn’t just about how you perform on the field, it’s about how you behave off pitch when interacting/relating with different people. We need to use our playing years as a stepping stone for the greater things ahead of us. However good you are as a player, never let it get to your head so much so that you start being proud and thinking that others are beneath you. Learn to be humble even in victory.”

Capital is always a challenge when starting your own business but his daily mantra is this, “you can’t lack capital and a business idea if you claim to be an entrepreneur.”

He believes that if you lack capital, you can and should identify those who would support your business idea, go pitch to them and await their feedback. Your character will also play a role in their willingness to support you, that’s why Patrice is very vocal about how one behaves off pitch.

“There are very many businesses I have transacted without money and the reason for this is that those I worked with, trusted me to come through.” He said.

Being a business man means that Patrice has people looking to him for their salary. In times when the business has had a rough month, he ensures that he has means to pay his staff even if it means he gets nothing. This is propelled by his willingness to listen to his people and put himself in their shoes. That gives him a better understanding of their point of view thus making him work harder to ensure they are all paid their dues.

Popularly called “Kamau” within the rugby fraternity, Patrice notes this name was given to him because of his ability to deliver a service or product within the promised time.

He plans on expanding his business exponentially in the years to come and is also considering working on his coaching credentials and will use them later in life.