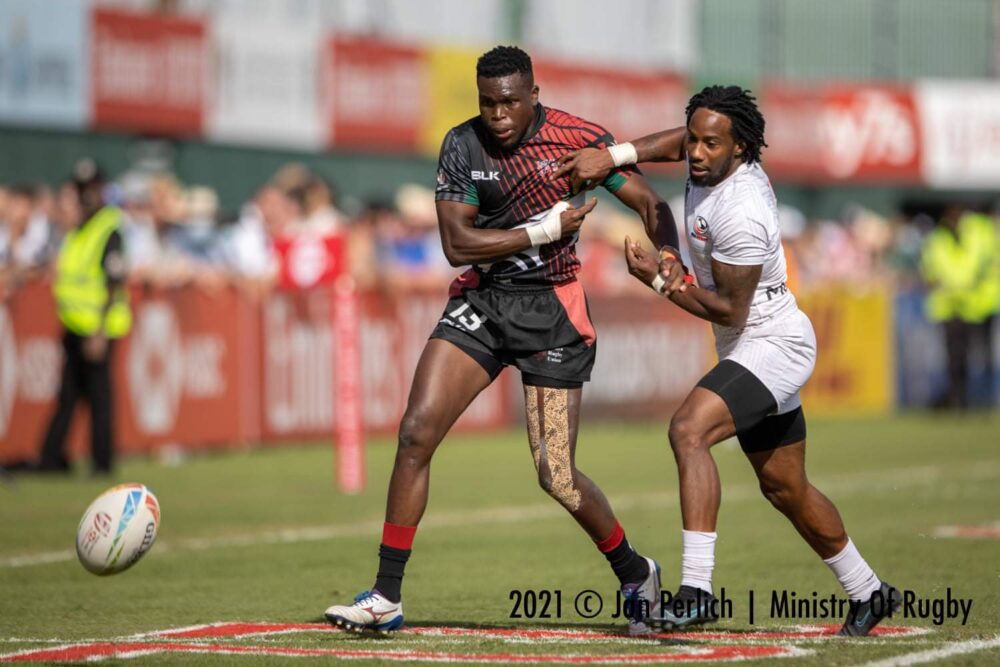 Alvin Marube is one of the rising stars in the Kenya Sevens National Men’s team, Shujaa since making his debut at the 2021 Vancouver7s tournament in Canada. His work rate and consistency in training saw him make the traveling squad for the two-legged Dubai7s tournament in late November and early December of the same year.

He started playing rugby in form one at Itierio High School in Kisii at the tender age of 14 years old. Like most of the Kenya Rugby players, he was a footballer first before transitioning into rugby. “I joined rugby because I was very curious. I’d see a few of my school mates playing it and I loved the intensity of the sport . Since majority of the students were into football, I decided to try out rugby. Luckily for me, Reuben Oroko was the school rugby captain at the time and he really pushed me to attend training, he was always on my case whenever I missed a session,” said Marube.

After High School, he joined Kisii RFC before relocating to Nairobi where he transferred to the Ngong Road side, Impala Saracens where he was spotted for his attacking pace and defensive skills on the wing.

He recalls getting the call up to join Shujaa when he was at home going on with his daily duties. “When the Team Manager called me, it was such a humbling moment, the first person I called was my mum. Unfortunately, due to covid19 all the sporting activities were halted and I had to wait for the opportunity to represent the Country. This however, did not deter me from my personal training as I worked very hard and it eventually paid off as I ended up getting the call up,” added Marube.

His former Club Chairman Walter Orangi describes him as a very brilliant players who puts in a lot of hard work in everything that he does, “Alvin has always been brilliant, by brilliant I mean he’s always wanted to be better each day, an avid listener and a great team player. Above all he’s always known that nothing but hard work will take him places. We at Kisii Rugby are proud to have helped shape him into who he is today,” he said.

He earned his first tour in September 2021 in the Vancouver 7s tournament, when asked to describe it in three words, he laughed and termed it as a fun, educative and embarrassing tour for him. He however scored his first try and the feeling was indescribable, “When we got back to the changing room, I picked up my phone and just started dialing numbers until any of the people I was calling picked. I just wanted to share the moment with all the people who supported my rugby journey so far.”

Marube was also part of the Shujaa squad that lifted the Safari Sevens Robin Cahill trophy on Saturday 31st October at the Nyayo Stadium.

“My biggest lesson so far from the National team is what Coach Innocent Simiyu keeps telling us, just do it right the first time. This doesn’t only apply in the National set up but also in life in general”

Without being push to the wall, we will have remained in our comfortable zone. But this circumstance challenges us to find the courage to move on.
Good show of character champs.#SafariSevens @levy_amunga @KenyaSevens pic.twitter.com/tFYfQllj4B

When asked what he’d like to achieve before he retires from the international scene, he said that he wants to win as many trophies as possible. “We put so much hard work in training, bearing that in mind, I’d want to win all the winnable trophies for Shujaa. From the Africa 7s, to the Rugby World Cup trophy because I truly believe, these are achievable goals. We just need to continue being consistent in our training discipline from National team level to individual level,”

“I call him Mr. #CheckMeOutTomorrow because of the self-imposed hashtag that he always tags on his post. It’s a personal call-to-action that pretty much describes the lad. He is someone with massive dreams and aspirations for what the future holds for him. And he really works hard to ensure that these comes to fruition. Alvin’s self-drive and love for initiative really stands out. He’s that guy who will see a challenge and ascend to it – with minimal follow up,” added Eric Ogweno, Kenya Sevens Team Manager.

Marube remains grateful to all his teammates from Kisii RFC, Impala Saracens and at the National Team level who have been very influential in his rugby growth. A special mention to Caleb Kiprotich, Walter Orangi, Nick Abok and Stephen Juma all who played a role in building his career before he got to the National team. His main role model is his dad and in the rugby circles, he looks up to Collins Injera and Fijian Jerry Tuwai.

Parting shot to the upcoming players in the country, “Hardwork, commitment and consistency is all you need to progress in this life. Never lose sight of that.” concluded Marube.

We are looking forward to seeing more and more of Alvin in the National Team colours and we truly believe that he will keep working hard to fly the Kenyan flag high.