Shujaa drops to Challenge Trophy in the Malaga 7s 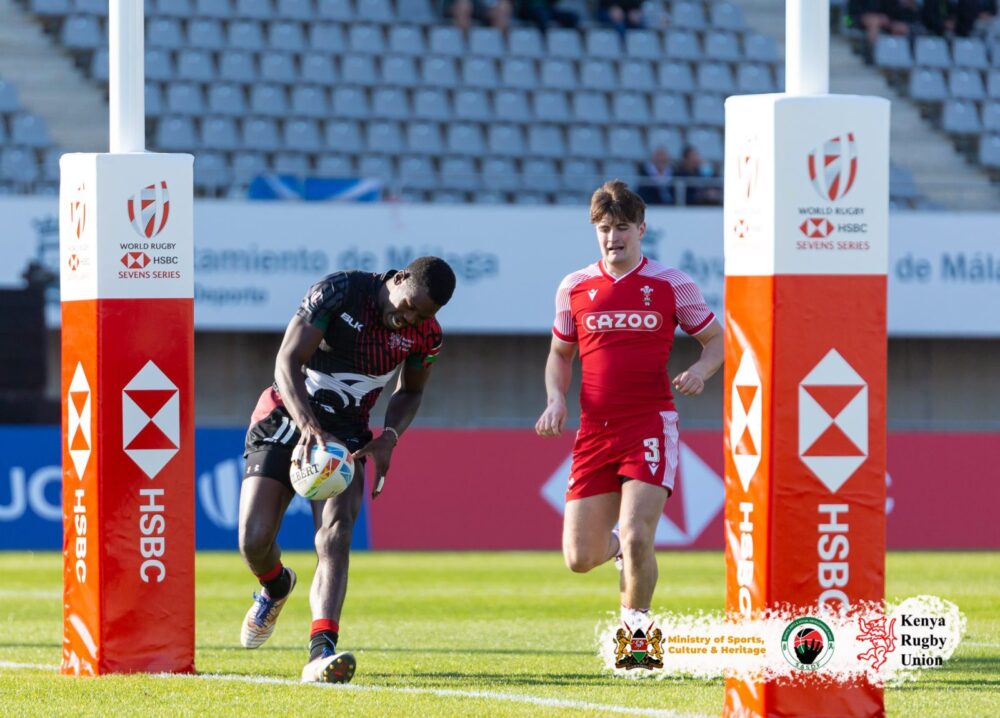 Shujaa kicked off their Malaga 7s campaign on Friday 21st January going down 17-19 and 14-19 against Canada and Wales respectively.

The first match kicked off at 1:22 pm saw Olympian Vincent Onyala register his name first on the scoresheet as he landed a brace in the second and ninth minutes of the match. Onyala’s tries sandwiched that of Cooper Coats and Josiah Morra who went over the whitewash in the fourth and sixth minute, with Coats converting his own try. Canada’s Alex Russell was next on the scoresheet as he dotted down a converted try at the stroke of halftime, Coats’ conversion bringing their total tally to  19 points.

In the second half, Captain Nelson Oyoo landed Kenya’s third try with Levy Amunga adding the extras, however, the clock ran out as Shujaa was chasing a winning try.

At 6:06 pm when Shujaa took on Wales, Onyala was once again on the scoresheet as his supportive skills on the pitch gave his side an early 7-0 lead as Amunga added the extras. The Welsh side was however determined on registering points to their name before the breather and their gradual build-up saw them level the scores when Morgan Williams went over the try line with Luke Trehane adding the twos.

In the second half, Williams went over the whitewash for his brace with Trehane adding the extras before Shujaa’s vice Captain, Jeff Oluoch rounded his inside defenders before cutting through a gap between the last two defenders on the right-wing making his way right under the posts. Amunga added extras. Both sides were leveled for a minute before Tom Brown landed his team’s third try with the conversion sailing wide, Wales taking the five-point lead.

As Shujaa was attacking, a knock-on with seconds left on the clock snatched away any hope they had of leveling the scores or winning. Wales won the scrum and kicked the ball into touch securing the 19-14 victory.

Speaking after day one, Head Coach said, “Tough day at the office we are not clinical at key moments of the game. We will look to build on the day’s performance and chase maximum points,”

Shujaa faces France tomorrow, Saturday 22nd January at 1:49 pm in the last pool match. The quarterfinals will kick off at 7:20 pm EAT.