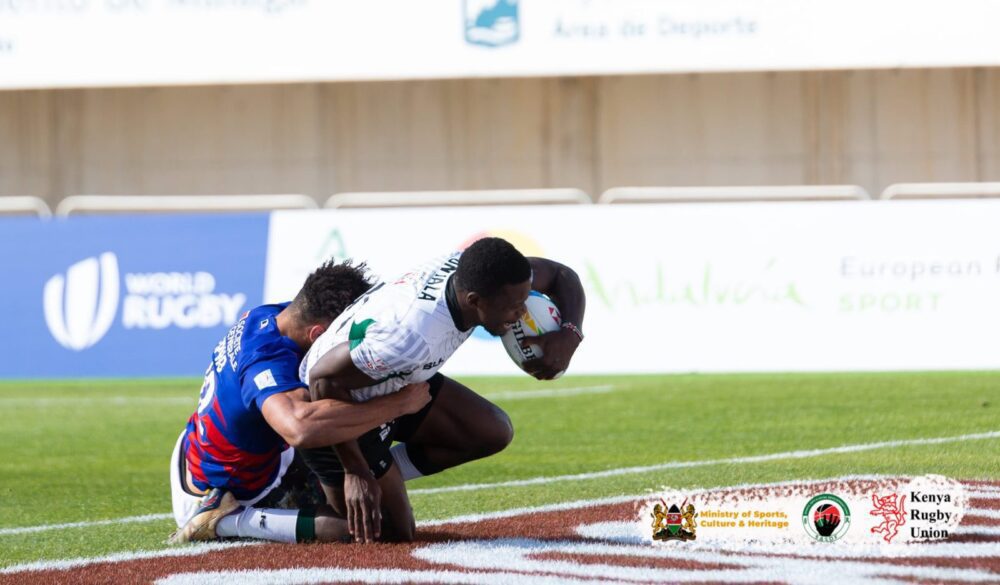 In their third Pool D match, against France, Kenya Sevens scored 26 unanswered points in the second half of this match after going down 0-15 at the breather to secure their first Malaga7s victory with a 15-26 score.

France scored their 15 points through Aaron Grandidier’s brace and Joachim Trouabal single try, all three going unconverted. Innocent Simiyu’s charges came back for the second half revamped and on a mission to secure their much-needed victory.

The Kenyan try-scoring machine of the tournament Vincent Onyala was first on the scoreboard in the eighth and thirteenth minutes sandwiching Captain Nelson Oyoo’s ninth-minute try. Debutant Derrick Ashihundu was Kenya’s third player to dot down a center-post try in this match in what will go down as a memorable moment in the HSBC World Sevens Series as his first try.

.@KenyaSevens ROAR back into form in Malaga!

However, the win was not enough to send Shujaa to the Cup quarterfinal as they had already lost their first two matches against Canada and Wales respectively. In the 9th place quarterfinal, Shujaa faced Scotland and lost 12-17, a performance that saw them drop to the 13th place semifinal where they will meet Japan on Sunday 23rd January at 2:19 pm.

The match against Scotland was pound for pound as both sides traded tries, Kenya’s Jeff Oluoch was first on the scoreboard in the third minute with Johnstone Olindi adding the extras for a 7-0 lead. Four minutes later, Jamie Farndale scored his side’s try at the corner with the conversion drifting wide for a 7-5 halftime score in favor of Shujaa.

Onyala opened up the second half with Shujaa’s second try but the conversion was unsuccessful. Scotland’s determination to reach the 9th place semifinal was unstoppable as Harvey Elms and  Paddy Kelly dotted down in the 10th and 13th minutes respectively with Gavin Lowe converting Elms’ try securing the 17-12 victory.