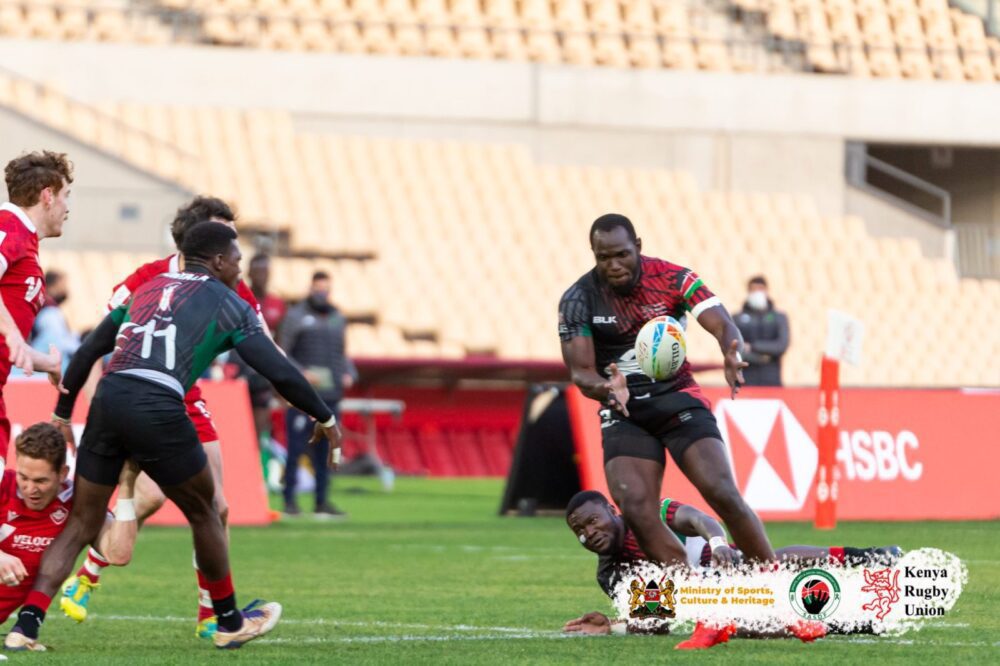 Kenya Sevens have dropped to the Seville 7s challenge trophy after losing two pool matches and winning one.

The Innocent Simiyu charges kicked off their Seville 7s campaign with a 0-42 loss to Australia on Friday 28th January, they however bounced back to their winning ways on day two when they beat Canada 24-5 in the 10:45am kick off fixture.

Herman Humwa was first on the scoresheet with Tony Omondi converting the try in the fourth minute. This came after Canada’s Anton Ngongo had dotted down for his side’s sole unconverted try in the opening minute. In the seventh minute, Alvin Otieno fended off his oncoming defenders to land Shujaa’s second try.

Come second half, Shujaa displayed excellent support play skills with offloads that led up to Tony Omondi going over for his try before Vincent Onyala sealed off the match with his converted try just after the hooter.

Shujaa securing a much needed 24-5 win.

Their third pool match against Scotland was a narrow 10-14 loss that confirmed Shujaa’s drop to the Challenge Trophy.

Scotland’s Gavin Lowe landed and converted his own try for an early 7-0 lead before Vincent Onyala went over the try line for Shujaa’s first unconverted try. Half time scores read 7-5, in the second half, Olindi dotted down at the corner for Kenya’s second unconverted try before Ross McCann cut through Kenya’s defense to land a converted center post try. Shujaa going down 10-14.

The quarterfinal pairings will be confirmed after the day two action has concluded.