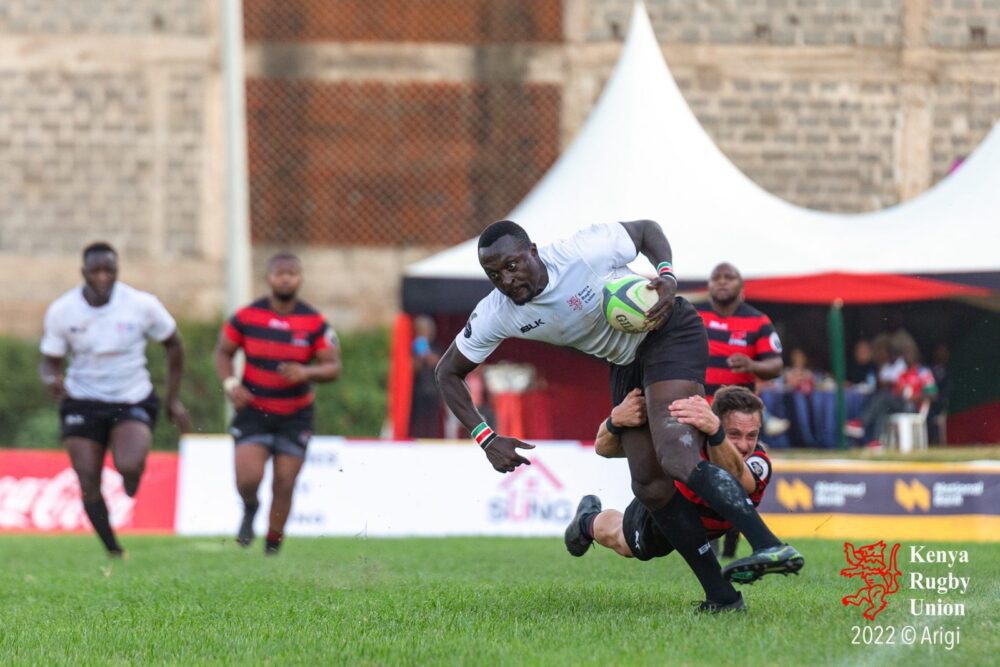 The men’s national rugby 15 aside, Kenya Simbas, saved their best performance in the Currie Cup Division One tournament for their last fixture against EP Elephants as they staged a brilliant come-from-behind win to reign supreme over the South African outfit in their final game played on Saturday 11th June at the RFUEA Grounds.

Trailing 0-17 after just fifteen minutes, and in what had looked like was going to be a tough encounter for the home team, the Paul Odera-coached side showed mentality, resolve, and utmost grit to clinch a 41-24 victory at full-time that left the vociferous home fans with nothing but praise for the Simbas.

The Elephants had made a super quick start off the blocks as they maximized on their superiority off the lineout. Inside the opening five minutes, Johanees Huisamen had already scored their first try after a determined attack that resulted from a powerful maul from the South African outfit. Another infringement from a rolling maul saw Simbas reduced to fourteen men as Malcom Onsando was yellow carded in the 11th minute.

From the resultant foul, the Elephants elected to go for a lineout once again which successfully led to their second quick try that was touched down by Diego Williams and successfully converted by Matheus Garrick who had missed the first attempt. And with a man advantage for them, the South African side quickly came back at Simbas and continued extending the gap in the match as they landed a third try which was unsuccessfully converted to get the game to a silencing 0-17 lead.

With Kenya not seeing any of the ball in that opening quarter of an hour, the returning Collins Injera, who was making his first start for the 15 side since 2018, showed why he was recalled back to the team as he perfectly used support play to set up Vincent Onyala who landed Kenya’s first try of the game. The dominating Elephants had made a rare error as they lost ball in contact, Injera picking the loose ball, charging for the try line with acres of space ahead of him before offloading to Onyala who had created a 2-v-1 situation. Flyhalf Dominic Coulson however missed the conversion as Kenya reduced the deficit to 5-17. That piece of play appeared to have lifted Simbas’ spirits as they believed and got themselves on the ball even more.

Just a minute after returning back to the pitch, Onsando atoned for his earlier sending off when he bulldozed his way at the corner for Simbas second try of the game that was again unsuccessfully converted by Coulson. The flyhalf however managed to get his first points in the game when he took the scores to 13-172 when he nailed a penalty awarded to the team. After Simbas thirteen straight points, Elephants refused to sit back any longer and they punished a poor clearance kick by Darwin Mukidza as Daviam Swanepoel picked the ball inside Kenya’s half before showing a clean pair of heels on the edge of the line and then finishing off the move with a diving try at the corner for their fourth try which was converted for a 13-24 half time lead.

In the second half, Simbas all but showed how strong their mentality was as they scored twenty eight points in a half that Elephants got nothing on the board. The rout started immediately with the half time team talk appearing to have the desired effect when Injera made a cute line break from a scrum move before touching down under the centre posts after beating his scrambling markers, Mukidza successfully converting to get Simbas’ deficit back to four points again. Mukidza, who had once again started in his ideal full back position, was on hand to give Simbas a first time lead in the match when he made a break on the right side before successfully converting his touch down which got the scores to 27-24.

The Elephants missed a glorious chance to restore parity in the game as Merlynn Pieterse, jeered by the home side, missed a penalty attempt for the South African boys. From that point on, there was no looking back as Simbas responded to whatever attack their opponents threw their way. Frustrated by the Simbas who were not letting up in defence, the Elephants conceded a penalty try after illegally and intentionally stopping a powerful maul started by the home side from a lineout which enabled the team to get a ten point buffer at 34-24. With less than five minutes to play

Onyala managed to seal his brace in the match with Andrew Matoka successfully converting to complete the 41-24 victory. Following their successful completion to their Currie Cup Division One tournament, the Simbas will now begin preparations for their 2023 Rugby World Cup qualifiers that are set to take place in France from 1-10 July.