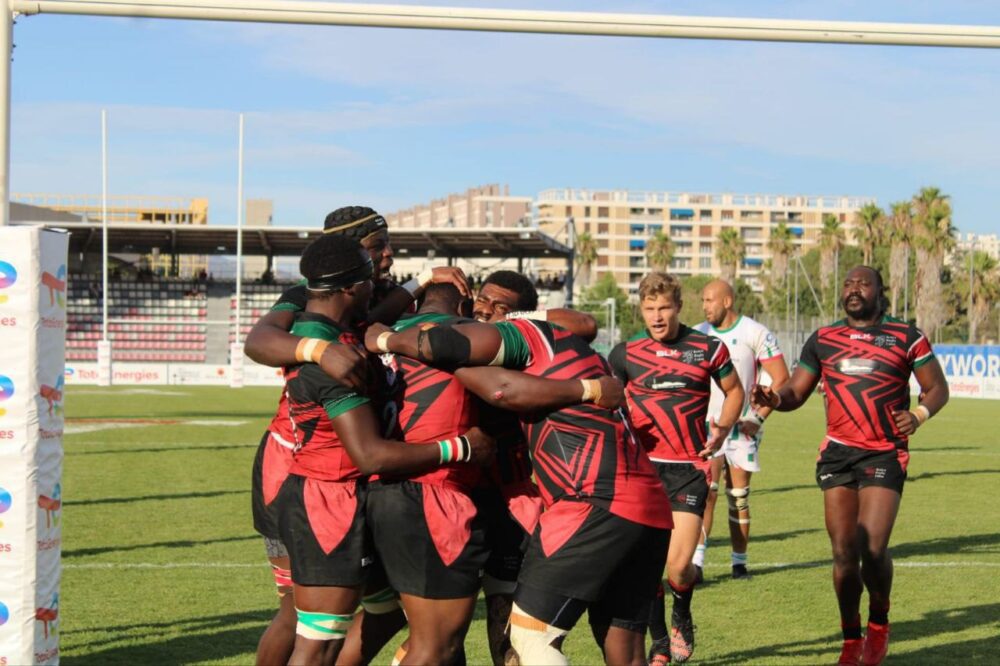 The Simbas reached the Rugby Africa Cup final with a gutsy 36-33 victory over Algeria in semifinal action at the Stade Delort in Marseille, France on Wednesday 6 July 2022.

Paul Odera’s charges had to dig deep for the result, twice falling behind to the Algerians with fullback Darwin Mukidza restoring on both occasions, converting tries from inside center John Okoth to level the scores at 14-14.

Mukidza then scored and converted his own try to give the Simbas a 21-14 lead at the interval.

The intrigues in this fixture were far from over, the Algerians going over the whitewash from a rolling maul after the restart to score a converted try that again brought both sides level at 21-21.

Jone Kubu, on as a replacement for Mukidza, then stroked home a penalty for a 24-21 Simbas lead before hooker Eugene Sifuna burst through to land under the posts, Kubu converting for the 31-21 lead.

The Simbas would then concede a penalty try that cut the deficit to three points but defended resolutely to bag the result and berth in Sunday’s final.

Speaking after the game, Odera said, “We struggled a bit in the setpieces but we have to give credit to them (Simbas). Every time Algeria came back at us we were able to get ahead. Algeria, as expected, were going to be a tough opponent. They were always going to put us under a lot of pressure in the forwards.”

“But mine is so much joy, we are one game away from coming back to France in 2023 which is huge. So proud of the team, just enjoying the win. We regroup, we recover and then we go again.The boys do realise that it is just 80 minutes away from making history as the first Simbas team to qualify for the Rugby World Cup, “ he concluded.

The Simbas will play either Namibia or Zimbabwe in Sunday’s final with direct qualification as the African representative to the 2023 Rugby World Cup in France at stake.