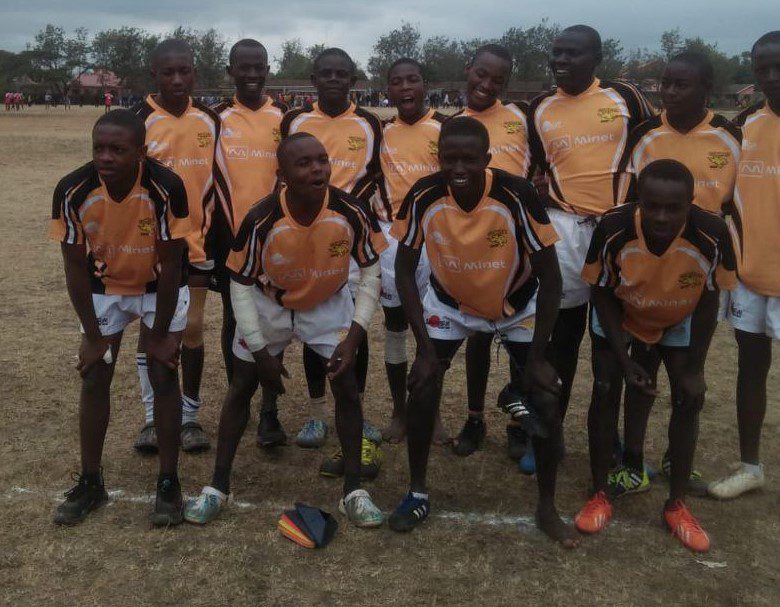 While the side did not advance to the cup quarterfinals, they still drew a lot of positives from their maiden outing on the national schools’ stage. They however had a memorable fixture against eventual champions Koyonzo, falling to a narrow 22-14 defeat in a match that the Koyonzo Head Coach later said was the team’s hardest en-route to the national title.

David Weru, the Kenya Rugby Union Regional Development Officer for the Nairobi Metropolitan Region attributes the school’s performance to a seed that was planted nearly a decade and a half ago when an age grade rugby program was introduced at the Ngong Township Primary School in 2008 by him and the late Erick Situma, the then Kenya Rugby Union Development Coordinator.  This program later received support from The Rugby Patrons Society through the Community Rugby Association.

He says,” The Ngong Township Secondary School boys started their rugby while at Ngong Township Primary School and with the great support of their Head teacher Mr. Lagat and Madam Kiwa.  Head teachers and teachers play a big role in accepting and developing the game of rugby in primary schools. They have played rugby from an early age of 9 years, most of them graduated to high School.”

“When rugby is started in primary Schools, the young boys and girls acquire the basic skills of playing the game and also develop their natural skills at an early age. This is the point where running and evasive skills, passing and receiving, game awareness, passion, discipline, integrity, for the game is well nurtured,” Weru adds.

“Most rugby players who started playing in primary school stand out from the rest. In 2015, for instance, boys from Ngong Township Primary School and a few from the Runda age grade rugby program joined Muhuri Muchiri Secondary School. They played at the national school games in Mombasa in 2017 and emerged second runners up, securing qualification to the East Africa School Games in Gulu, Uganda where they emerged winners. They were skillful with good passing and receiving, tackling skills, game awareness, rugby was basically in their system,” he observes.

“Primary school (age grade) rugby is the way to go if Kenya is to be a top performer on the global stage,” opines Weru, adding, “You can always notice the great skills and game awareness from players such as Vincent Onyala and Johnstone Olindi who started playing age grade rugby at KCB in 2007. Other notable players are Homeboyz RFC’s Amon Wamalwa from Cheleta Primary School and Runda age grade rugby who was the 2017 MVP at the East Africa School games in Gulu Uganda and most recently top points and try scorer at the close of the 2022 National Sevens Circuit. Amon also played in the National Rugby Team in Africa World Cup qualifier where he scored the all-important try that sent Kenya to the Rugby World Cup Sevens.  Other notable players who have emerged from age grade rugby are Olympians and Kenyan internationals Bridgit Louche through Runda Rugby and Sheila Chajira from Arise age grade rugby.”

Commenting on the just ended nationals in Nakuru, Weru says, “Ngong Township was not the only school with players who have emerged from various age grade programs as teams like Nduru , Nanyuki , Shimba Hills, Butula  andMenengai High also had players who have come through the ranks.  I would like to commend the Kenya Rugby Union for introducing the Damu Pevu Rugby Program in Primary Schools as well as the Ministry of Education for including Tag rugby in the Competence Based Curriculum.  We urge clubs, community based organizations and high schools to assist in the growth and development the game of rugby in primary Schools. The future is bright with Long Term Player Development – LTPD.”

Back to Ngong Township Secondary School, Weru concludes by saying, “The dream of Ngong Township Secondary School to eventually play and win the East Africa Secondary Schools rugby title is still alive. This is a project that will be achieved through the right processes, from youth strength and conditioning, high performance training, mental training and creating rewards in the process. The school has a number of partners including Genesis Sports, Edward Moses Media and Leleshwa Camp, Ngong Hills who part of the team steering the school towards fulfilling this dream.”

We look forward to seeing more of Ngong Township on the local and regional schools’ scene.