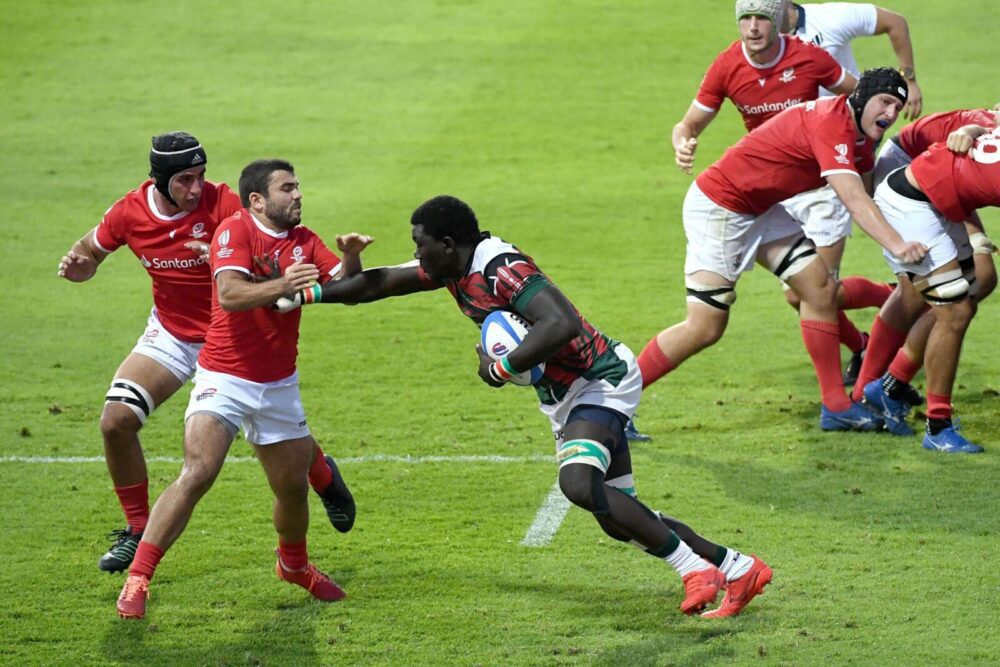 Trailing 0-35 at the break, the Simbas hopes of qualifying for the 2023 Rugby World Cup came crashing down as they conceded 50 second half points, going down 0-85 to Portugal in their second fixture at the Final Qualification Tournament in Dubai on Saturday 12 November.

The Simbas were second best on an afternoon that saw lock Brian Juma sent off for a second yellow card offence.

It took Os Lobos less than a minute to breach the Kenyan defence as number eight Thibault de Freitas profited from a powerful driving lineout.

Scrum-half Samuel Marques converted, and he did the same in the seventh minute after Portugal hooker Mike Tadjer had dotted down at the end of another set-piece drive.

Brian Tanga thought he had got Kenya on the scoreboard in the 14th minute, but his try was ruled out due to an earlier knock-on.

The Simbas conceded a third try almost instantly, through Manuel Cardoso Pinto, and Portugal subsequently secured a try-scoring bonus point in the 22nd minute as José Lima went over.

With Kenya second-row Brian Juma in the sin-bin, Os Lobos added a fifth try before half-time when winger Vincent Pinto was the beneficiary of a smart lineout move. Marques maintained his 100 per cent record from the tee to make the score 35-0 at the break.

Needing a victory to stay in contention for a place at RWC 2023, the task facing Kenya was already huge but got even bigger within a minute of the restart as Juma received a second yellow card and was subsequently sent off.

Portugal ran in five tries in the next 20 minutes as Tadjer, Vincent Pinto, captain Tomás Appleton (twice) and Jose Andrade all crossed the whitewash. Marques converted two, while Jéronimo Portela added another to give Os Lobos a 66-0 lead with a quarter of the match remaining.

Os Lobos crossed the whitewash on a further three occasions, through a penalty try, Joāo Belo and Lionel Campergue, their 13th and final score coming after Kenya had been reduced to 13 players, Geofrey Okwach sin-binned for a dangerous tackle.

The result sees the Simbas remain fourth on the four team log with two losses from two outings, having lost 14-68 to the USA in their opening fixture on Sunday 6 November.