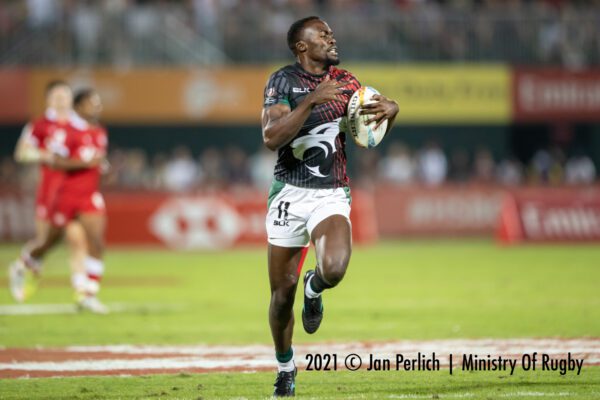 Edmund Anya struck at the death to seal Shujaa’s place in the Los Angeles 7s fifth place final with a 21-14 victory over hosts USA at the Dignity Health Park in Los Angeles on Sunday evening.

This match was a tight contest, the two sides going at each other for better spells of the opening half.

Indeed it was scoreless until the very last play of the opening half, Alvin Otieno receiving the ball inside the Shujaa 22 and racing clear to touch down, Daniel Taabu added the extras for a 7-0 lead at the interval.

The USA sought a response after the restart, stating their intent initially through Perry Baker who fumbled while grounding the ball before being awarded a penalty try moments later to tie up the scores after Kevin Wekesa was binned for a deliberate knock on in the in goal area.

The hosts capitalized on the extra man advantage, scoring under the posts after Baker set up Steve Tomasin to score and convert as the USA led for the first time in this match.

Shujaa, with their backs against the wall, launched a bold counter attack from their five, Taabu sprinting clear to touch down and convert, tying the scores at 14-14 before Anya stepped up to seal the result, Taabu’s conversion giving it a bit more gloss ahead of the fifth place final set for 2.31am EAT on Monday morning.