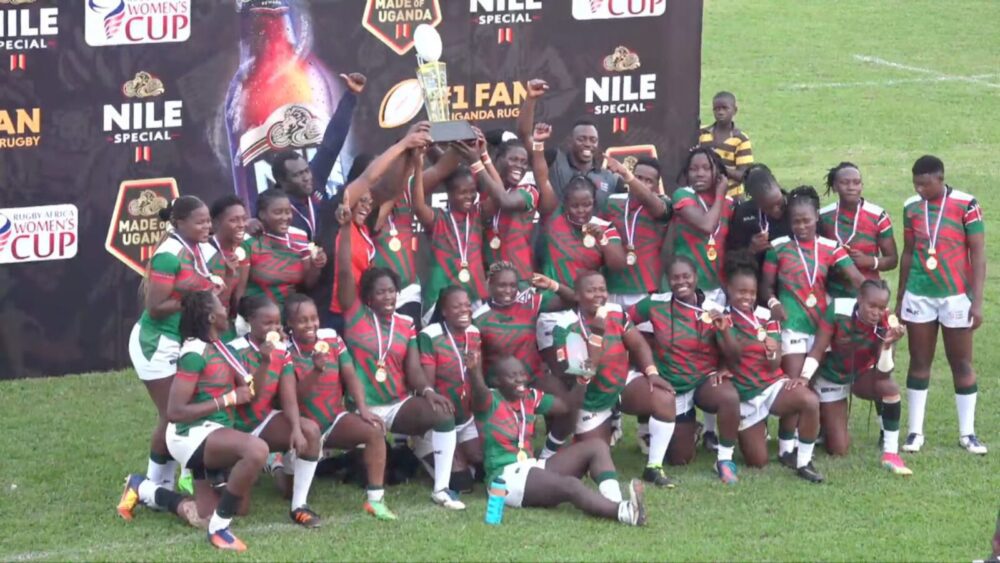 Leading 8-0 at the interval, Kenya completed a clinical display of rugby to defeat hosts Uganda 23-3 and win the Rugby Africa Women’s Cup Pool B competition at Kampala’s Wankulukuku Stadium on Wednesday 2 November 2022.

This match was as tense as they come, the rivalry between the East African neighbors obviously a huge contributing factor.

Kenya’s Lionesses dominated territory and possession, pinning Uganda’s Lady Cranes back right from kickoff. Their pressure would pay off 11 minutes into the half when fullback Ann Goretti went over the whitewash for the game’s opening try.

The Kenyans were unrelenting, denying Uganda any whiff of meaningful possession and territory. Grace Adhiambo in particular, kept the hosts quiet with her well weighted territorial kicking while Knight Otwoma’s accuracy from the throw in saw Dennis Mwanja’s charges enjoy large spells of possession.

They would extend the lead in the 21st minute later when Goretti drilled home a penalty as the Lionesses began pulling away.

The Lady Cranes would buzz into life towards the closing stages of the half but had to contend with a Lionesses defense that held firm and forced them into an error that killed their momentum as the half eventually came to a close.

Player of the match Adhiambo then caught the hosts cold with a drop goal that took the Lionesses 11-0 ahead after 47 minutes of play.

The loss of experienced prop Evelyne Kalemera on 50 minutes seemed to momentarily set Kenya back but replacement Rose Otieno settled into the game, forcing her Ugandan defenders on the backfoot.

A rare Ugandan foray into Kenyan territory moments later saw them draw a penalty that the experienced Charlotte Mudoola successfully put away for their only points of the game.

From a slow and patient period of phase play, Christabel Lindo spotted a gap after finding herself in possession, racing clear to score at the corner to put the Lionesses 16-3 up on 62 minutes.

This seemed to lull the Lionesses into lowering their guard and they indeed found themselves under pressure but again held firm on defense, forcing the Lady Cranes into an error that eased the pressure.

The game ebbed and flowed as time ticked on the clock, replacement prop Otieno, a handful off the bench eventually barging over in the dying moments of the match, Goretti sure with the extras as the Lionesses ran off with the result.

Kenya now qualifies for next year’s Rugby Africa Cup which serves as a qualifier for the inaugural World Women 15s WXV in 2023.