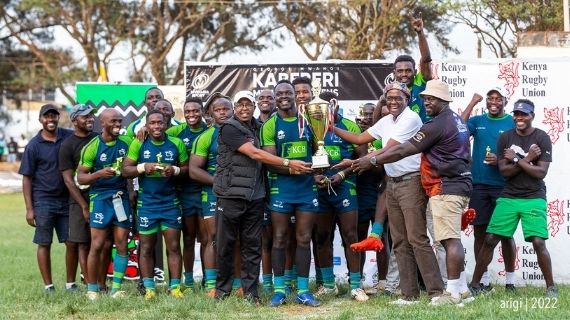 KCB won the opening round of the National Sevens Circuit after defeating Strathmore Leos 12-10 in a tense Kabeberi 7s cup final at the RFUEA Ground on Sunday 22 May 2022.

The bankers were quick off the blocks, starving the Leos of possession before Bob Muhati went over the whitewash for the game’s opening try. Levi Amunga drilled home the conversion for a 7-0 lead.

Further KCB pressure saw the evergreen Jacob Ojee score the bankers’ second try for a 12-0 lead at the break.

Strathmore returned for the second half a transformed side, Brunson Madigu following up on his own kick to ground the ball for a 12-5 score before Joseph Ayiro landed a try for a 12-10 score.

It remained tense as the clock wound down, center referee eventually sounding the full time whistle to end the match, KCB winning the first title of the 2022 sevens season.

Menengai Oilers claimed third place with a 26-5 win over Homeboyz.

KCB win the opening round of the 2022 National Sevens Circuit#Kabeberi7s #NSC2022 pic.twitter.com/dsFXp4X0yz