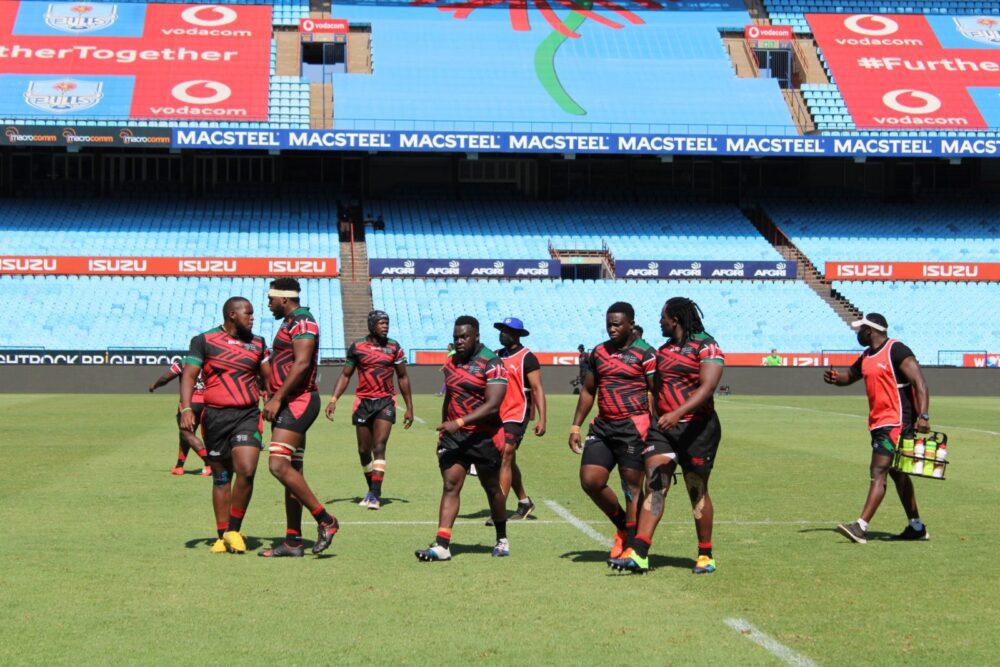 A 59-6 victory by the Kenya Simbas over the Diables Barcelona at the Toyota Stadium in Bloemfontein was the most incredible way to end their 23-day tour in South Africa.

Played in what was mostly a rainy afternoon that saw the match get stopped twice due to the risk of lightning, the Kenya Simbas were relentless in their efforts to finish off their tour on a high. It was Derrick Ashihundu who first went over the try line on the left wing with Andrew Matoka adding the extras for a 7-0 Simbas lead in the first eight minutes. They Simbas would later get awarded apenalty try after one of the Diables Barcelona forwards was sent to the sinbin for foul play that denied Simbas a try scoring opportunity.

The Spaniards would then slot in a penalty kick after a Simbas infringement got them penalized in their 22M area. SScores now read 14-3 in the Simbas favour. Just before the match was stopped due to the weather, Simbas went over for their third try through Stephen Sakari who bulldozed his way through four defenders to land an unconverted corner post try. Upon resumption of play, a penalty against the Simbas saw the Spaniards add on to their tally with an additional three points before Ashihundu rounded his defenders to score his brace. Matoka’s conversion brought the half time scores to 26-6.

The second half was a full Simbas show, from the scrummaging to the incredible ball in hand skills displayed by the backline. Reserve backrow opened up the last 40 minutes with an unconverted try that came off the back of the forwards hard work in several phases. The ball would later find its way to Ashihundu’s arms and he did not shy away from showing off his pace and tackle evasion tactics as he raced down 50M to score his hat-trick. This moment was quickly complemented by John Okoth’s try. Picture this, the Diables Barcelona are penalized in their red zone for an infringement but before they gather themselves and realign, the very aware Okoth quickly taps the ball and cuts through them to land his first try of the match. Both Ashihundu’s and Okoth’s tries were converted by reserve flyhalf, Jone Kubu, scoreboard now reading 45-6.

Paul Odera’s charges were not done with the scoreboard, Vincent Onyala also registered his name on the match sheet followed by John Okoth’s second try with the mercurial Jone Kubu slices the uprights in both occasions for a 59-6 full time score.

This was the fourth and final fixture of the Kenya Simbas in their South African tour. They travel back home on Friday 26th November after what has been a very demanding and fulfilling 23 days away from home.