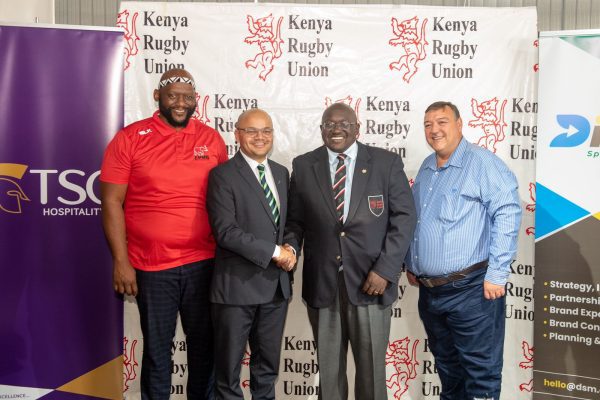 Kenyan rugby fans are in for a historic treat when the Currie Cup comes to town in the month of June when the Simbas play two home matches at Nairobi’s RFUEA Ground on consecutive weekends.
They will play against the Leopards on Saturday 4th June before hosting the Eastern Province Elephants a week later.

The Kenya Rugby Union is using the Simbas participation in the Currie Cup as preparation for July’s Rugby World Cup qualifiers in Marseille, France.
Speaking during a press briefing to announce the two fixtures, Kenya Rugby Union Chairman (KRU) Oduor Gangla said, “It has been a phenomenal experience for our team to play against fully professional sides in the Currie Cup. All this is part of our build up for the Rugby World Cup qualifiers happening in July this year. I really appreciate the President of South Africa Rugby Union (SARU), Mark Alexander and his CEO, Jourie Roux who have believed in what we are doing as Kenya Rugby. They have been very supportive of us. We have continued with very positive engagements.”

“We did intimate to SARU that it would be very good for the Currie Cup and Kenya Rugby if we could have some of our matches in Nairobi and after deliberation with both Leopards Rugby Union and Eastern Province Rugby Union, we all agreed to have games in Nairobi. We are very happy as it also an opportunity for Kenyan fans to watch the Simbas before they head off to the RWC qualifiers,” he added.

“Very exciting times for us at Kenya Rugby and I appreciate Eugene and Thando and their teams because it’s not easy to get somebody from a country with everything to come and play in Nairobi, and we are very confident that we will make this a worthwhile experience for the players to come and enjoy rugby in Nairobi, “he concluded.

Paul Odera, the Simbas Head Coach added, “I can assure the EP Elephants and the Leopards that away from the rugby field, you will experience the warm hospitality of the Kenyan people. I first toured South Africa as a schoolboy with the Kenya Schools in 1994. We played at Ellis Park, curtain raising for the clash between Transvaal and Eastern Province. It is a very poignant moment for me to see that Eastern Province is one of the provinces that will make history when they play in the Currie Cup in Nairobi.”

“To be honest, the quality of rugby we encountered on the field on that day, 28 years ago, was fast, it was brutal and uncompromising. The last three weeks in South Africa when we have played in the Currie Cup have shown us that not much has changed and it is now clear to us that the state of the game in South Africa, the home of the world champions, is in good health. I am sure that a lot of rugby administrators are now coming to realize that the gap between a Tier 1 nation like South Africa, and a Tier 3 nation like Kenya is a lot more than they imagined. Frankly, there is nowhere for us to hide over the next month and a half. Every sector of the team is being tested and put under pressure on a weekly basis. “

“This Currie Cup campaign is a big part of fulfilling our vision to qualify for the 2023 Rugby World Cup in France. Other nations like Argentina have fielded franchise teams in South African domestic competitions and they are now one of the most highly rated test nations in the world. We as the Simbas and the Kenya Rugby Union intend to follow the same path. If we participate in the Currie Cup consistently for the next ten years, then, it will be just a matter of time before Kenya Rugby gains enough respect and shows enough progress that the Simbas can be considered worthy to face the ultimate challenge of facing the Springboks in a test match. As the Head Coach of the Simbas I thank the courageous chairman of the Kenya Rugby Union, Oduor Gangla, members of the SARU executive and board members of the Leopards and EP for taking a chance on Kenya Rugby to bring the Currie Cup fixtures to Nairobi. The Simbas are making progress with every session and every game. The evidence on the field points to the fact that we are on an upward trajectory. This relationship between Kenya and South Africa will be of mutual benefit to both countries in the long term, both on and off the field,” he concluded.

Also gracing the press briefing was Yusuf Jackson from the South African Rugby Union (SARU), owners and organizers of the Currie Cup.

Jackson, who is the SARU Tournament Director said, “We believe that with the introduction of opportunities such as exposing our South African players to play in Kenya is not only going to strengthen your rugby but rugby in Africa.  We want to be part and parcel of the success of the game on the continent by doing what we can. We are very excited about this venture from a South African perspective.”

Eugene Fourie, Leopards CEO welcomed the initiative saying, “We don’t get many opportunities as first division teams to play against international teams. This is a huge opportunity for the Leopards. There is a lot of excitement from our union to come and play Kenya in Nairobi.  It will be an absolute experience for my players. Hopefully this will be a lasting relationship with Kenya Rugby, and hopefully Kenya Rugby can stay in our competition. If everything goes well, we can build on what we started and grow it into a proper African competition where Kenya and all other unions benefit. I also thank SARU for agreeing to include Kenya in the Currie Cup and also for allowing us to come and play in Kenya.”
Fourie’s sentiments were echoed by Eastern Province Rugby CEO Thando Manana.

Manana who in 2000 became the third black African player to don a Springbok jersey after their return to the international fold in 1992 said, “It is such an honor that your team is currently participating with us in the Currie Cup, and they can only grow from that. Little did we know that the inclusion of Kenya, Georgia and Zimbabwe in this year’s competition would create excitement. We, as Eastern Province are already bracing ourselves for the trip to Nairobi, we are very excited. We hope this initiative will help Kenyan rugby in the long term. Kenya is a good rugby nation and I hope that this initiative boosts their France 2023 campaign.”

The two fixtures in Nairobi were made possible following a commercial agreement with Direct Sports Management (DSM).

Raymond Oruo, DSM’s Strategy and Partnership Lead said, “It has been a long while since we saw the Simbas in Nairobi and we hope that Kenyans who love the Simbas will be grateful for these fixtures. We will be giving further details around ticket prices and kickoff times closer to the match days.”

ABOUT THE CURRIE CUP: The 2022 Currie Cup First Division is the 84th edition of the Currie Cup. As the second-tier of the competition, it is running alongside the 2022 Currie Cup Premier Division.from April to June in a single round-robin format, following the realignment of the South African domestic rugby union calendar to dovetail with the northern hemisphere and the United Rugby Championship, which features four South African sides.