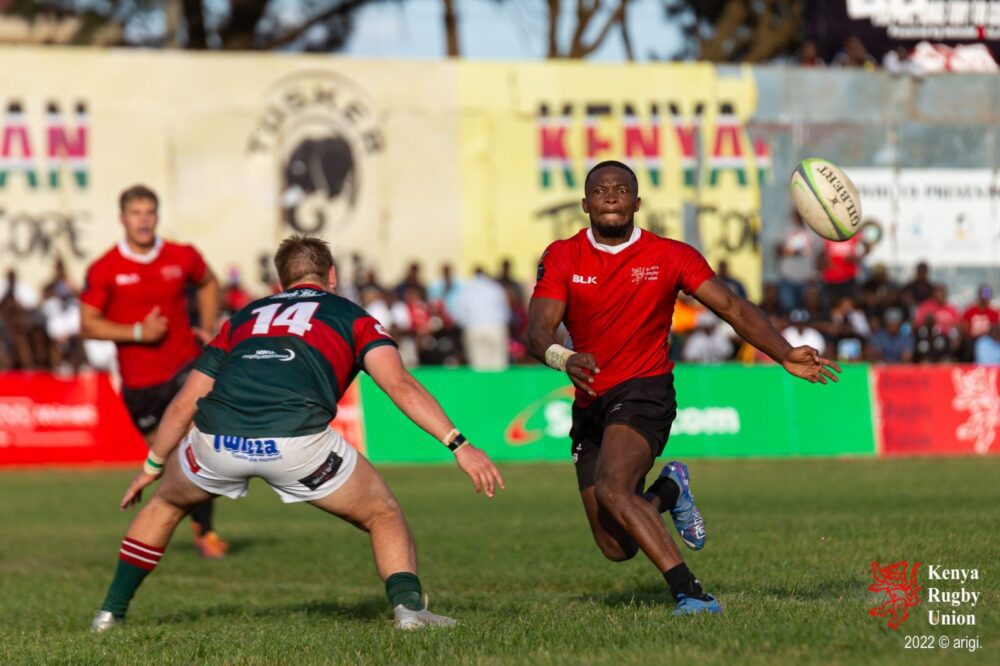 The Kenya Men’s national rugby 15s side, Kenya Simbas, who had already made history in hosting a Currie Cup Division One match in Nairobi, had an outing to remember as they ran out 51-35 winners over South African outfit Leopards in their penultimate match played at the RFUEA Grounds on Saturday afternoon.

Roared on by the vociferous home fans, the Paul Odera coached side put in a scintillating and enjoyable display over eighty minutes as they fittingly recorded their second Currie Cup Division One victory over the reigning champions with an impressive Darwin Mukidza bagging 17 points off one try, two penalties and three successful conversions.

Playing their first ever Currie Cup match on home territory, the Simbas got the perfect start to the game as they got the early dominance in terms of territory.

Just ten minutes in, the national side had turned that domination into points as the resplendent Mukidza successfully drilled in two penalty kicks that gave the team an early 6-0 lead.

Stunned by that blistering start to the match by the home team, the Leopards showed what they are capable of when they stole a momentary lead in the game after successfully converting their first try of the game.

From a lineout, the Leopards unleashed a powerful rolling maul as they ate towards the Kenyan 22m line before releasing the ball to Poienaar van Niekerk who made a determined cut across the park, evading challenges thrown his way before touching down for Leopards’ first try which was converted by Duren Hoffman for a 6-7 lead.

However, as if in retaliation, Simbas responded immediately as they unleashed two converted tries in quick succession.

First, Mukidza checking the condition of his lungs as he ran all the way from the halfway line, fending off two challenges from Leopards before successfully touching down for a try and converting his own attempt to restore Simbas lead to 13-7.
Derrick Ashihundu was then next in line to bear the try scoring duties as he crossed the whitewash before Darwin added the extras for a 20-7 lead.

As the game ticked towards the half time break, flyhalf Dominic Coulson added Kenya’s third try that was for the first time missed by Mukidza.

Quan Eymann then pounced on a sloppy handling error from Kenya on the halfway line as he instinctively kicked, chased and grounded the ball under the posts to get back his side in the game as the two teams went into the break with a 25-14 score line following a successful conversion.

In a second half that kicked off in scrappy fashion, it is Kenya who had a mirror start to the first as Vincent Onyala landed a converted try to extend the team’s lead to 32-14.

Beldad Ogeta, who had single handedly contributed to Onyala’s try by drawing in the remaining marker when he attacked the blindside before releasing the KCB man, got on the scoring act as he finished off a well executed scrum move, dotting down on the corner, an angle Mukidza was unable to nail the conversion as the attempt sailed wide to get the scores to 37-14. 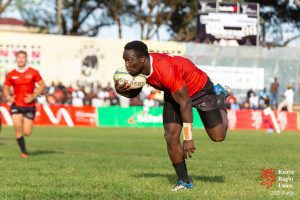 The Leopards had managed to reduce the deficit from a converted try as Keenan Twigg stole possession before running all the way to the try line.

Eugene Sifuna then immediately scored another try for Kenya that Mukidza successfully converted before Leopards had a brace of converted tries as they threatened to take the game to Kenyan in the dying minutes of the game with the scores reading 44-35.

But with the hooter well sounded, a brave Simba who had chosen to continue playing, reaped the rewards of their decision as he, Thomas Okeyo, broke and made a big run from the half way line before touching down for the final try and final action of the game, Andrew Matoka Matoka converting to seal the 51-35 victory for Simbas.