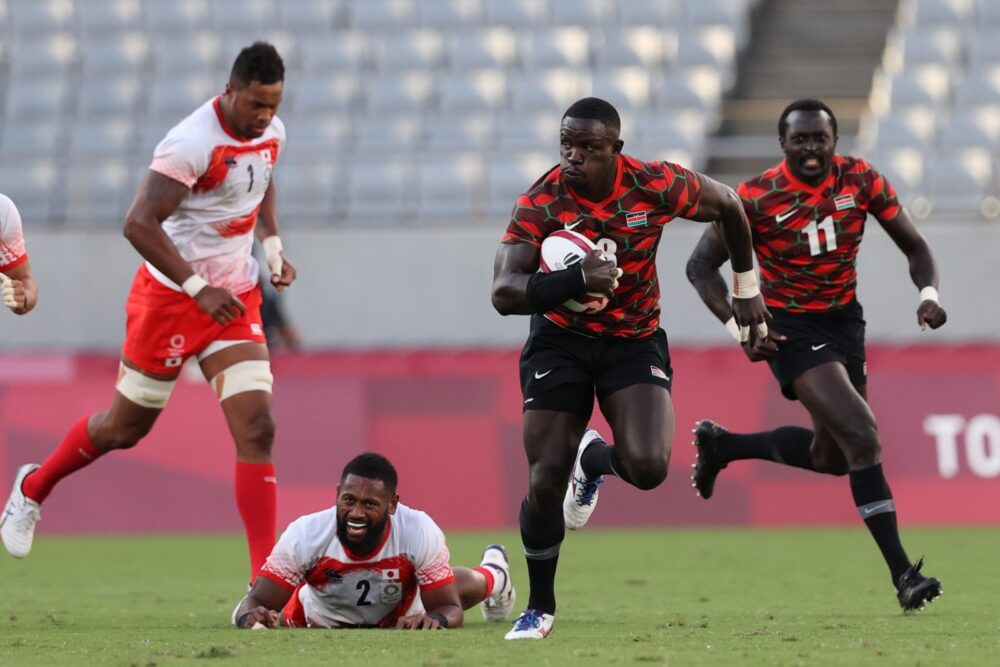 Kenya Sevens secured their first win at the Olympics on Tuesday 27th July with a 21-7 victory over hosts Japan in the 11:00 am (EAT) kick-off match.

Japan was first to go over the whitewash with a converted try but a determined Shujaa quickly responded with two tries in the first half. Alvin Otieno was first to register the Kenyan points on the scoreboard as he received an offload from his counterpart Jeffrey Oluoch. Otieno evaded a tackle from the Japanese player to score the first center post try. The conversion was successful.

A few moments later, Oluoch cut through a weak Japanese defense line, racing down the pitch for Shujaa’s second center post try with Johnstone Olindi converting for a 14-7 halftime lead.

In the second half, Shujaa added their final try that confirmed their victory through Captain Andrew Amonde. The mastermind Collins Injera keen eye enabled him to dummy and create space in the Japanese defensive line after which he set up Andrew to go over for the try that was converted by Olindi.

In the dying seconds of the match, Japan sent the ball wide to their winger who was well on his way to land their second try but a try-saving tackle from William Ambaka halted his efforts. Shujaa’s trio of Amonde, Injera and Amonde would eventually “Chokesha” the Japanese player who cleared the ruck and walked him into the touchline resulting in a Kenyan scrum. Scrum-half Injera passed the ball to Olindi who kicked it out securing Shujaa’s 21-7 victory.

Shujaa meets Ireland once again but this time, it’s for the 9th place playoff match kicking off on early Wednesday morning at 3:30 am EAT.