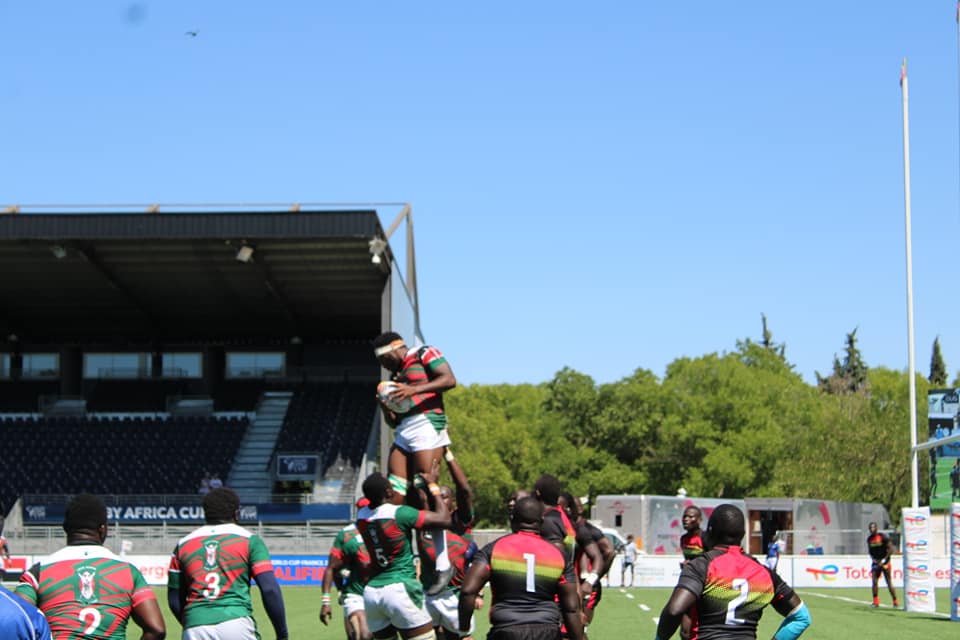 The Paul Odera charges did not take time in asserting their presence when the match kicked off at 4:00 pm EAT. John Okoth was first on the scoresheet as he landed Simbas first of six tries right under the post with Mukidza adding the extras.

The Kenyan forwards gave their opponents a run for their money as they pounced on a loose Ugandan ball, Vice Captain Malcolm Onsando powering past the Ugandan defense before offloading to Thomas Okeyo who raced down 40m to land Simbas second converted try.

A try on the left side of the pitch was denied after the Assistant Referee flagged a forward pass from the Simbas, denying them an opportunity to extend their lead by 19 points to none. This however did not deter the Kenyan pride as their attacking pace eventually saw them set up camp in Uganda’s red zone. A scrum to Kenya saw them extend their lead by seven points after the eventual man of the match Samuel Asati snuck past his defenders to land Kenya’s third try. Mukidza converted it with ease as he extended Simbas lead to 21-00.

Moments later, it was Bethwel Anami who registered his name on the scoresheet as he dove over for the converted try that saw Simbas leading 28-00 at the break. At this point, the Simbas were showing pure class and skill in both their attack and defense. There had been very few moments where Uganda set up shop in Kenya’s red zone but they were unable to convert their stay into points.

Simbas scrum in the second half, in Uganda’s 5m mark resulted in beauty of a try as Samuel Asati passed the ball to an unstoppable John Okoth who went past the Ugandan defense to land his brace. Teddy Akala was last on the Kenyan side to land a try with Mukidza converting both Okoth’s and Akala’s tries.

In the last minutes of the match, Uganda registered their consolation try as they landed a converted try in the 75th minute. Full time score read 42-7 to Kenya Simbas.

Speaking on the team’s performance, Head Coach Paul Odera stated that playing Uganda has always been an uphill task for Kenya. “From the management team, what we were looking at was seeing how well the boys can deal with travel and how quickly they were able to come together after a two week break. The win was always important because we needed to be in the semifinal. We’re very pleased with how the team performed especially in the set pieces and also with how they responded when put under pressure by Uganda, particularly on our defense. There’s still a few things to work on but we’re very happy with the performance. For now, we focus on recovery both physically and mentally and then we focus on the semifinal against either Algeria or Senegal,”

The simbas semifinal will be on Wednesday. More about the match will follow in subsequent communication.